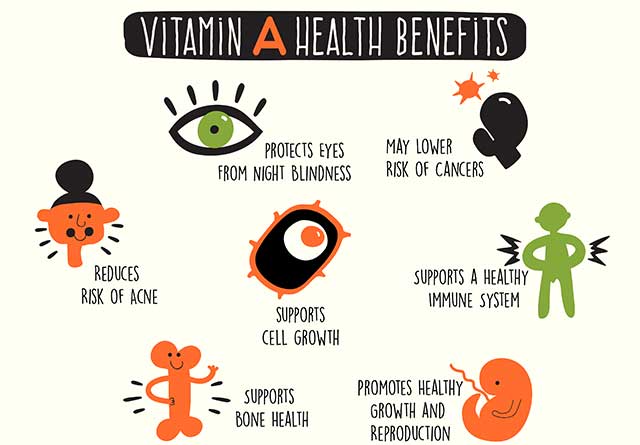 Vitamin A is usually associated with good vision and especially night vision. As a child I was always told to ‘eat my carrots so I could see in the dark’. While it is true that vitamin A is vital for vision, it also has a multitude of beneficial functions throughout the body. However, it is not true to list carrots as a source of this essential vitamin. The biologically active form of vitamin A is called retinol, because it is so prevalent in the retina of the eye. Carrots and other brightly coloured vegetables contain no vitamin A. They contain a pre-cursor to retinol known as carotene or beta-carotene, which has to be converted to the active form before it can do it’s work. This conversion is never very efficient and quite difficult for some people. Genetic variations, too much fibre in the diet, a lack of bile salts and eating raw vegetables can all play their part in making the transition from carotene to retinol more difficult. Healthy individuals without these problems convert beta-carotene to retinol at a ration of about 6:1, which means they need to eat 6 molecules of beta-carotene to absorb one molecule of true vitamin A.

A study from Newcastle University on a group of women showed that 47% of them had a gene variant that made it difficult or impossible to convert beta-carotene into active vitamin A. It is easy, therefore, for some people to become deficient if they do not consume retinol in their food.

The only dietary sources of the active form of vitamin A are found in animal foods. Liver and eggs are the most abundant, (which is one of the reasons we have meal suggestions for these in our recipes section). Vitamin A gets very little attention compared to vitamins C and D, which is unfortunate because it is absolutely vital for our health and for the proper development of babies and children. It has such a profound effect on our health because it regu­lates the action of over five hundred genes in the body, which makes it a major controller of all of our cells and how they function.

Long before we knew what vitamin A is, ancient people from around the world were aware that eating liver could prevent or reverse blindness. The Egyptians described it at least 3500 years ago: Assyrian texts dating from 700 BC and Chinese medical writings from the 7th century AD both call for the use of liver in the treatment of night blindness. It has also been written about in 18th-century Russia and among the inhabitants of Newfoundland in 1929. 2,400 years ago, Hippocrates prescribed liver for blindness in malnourished children. Despite all this knowledge, vitamin A deficiency is still the leading cause of blindness in some parts of the world. It is extraordinary that all this ancient knowledge is ignored and the NHS recommends that pregnant mothers should avoid eating liver in case they consume toxic levels. (More about this later.)

Vitamin A helps to prevent us from becoming ill; it keeps our immune system from overreacting; it is necessary for growth and reproduction. We need vitamin A for building bones and teeth, and for the actions of our hormones. It is essential for the development of a foetus into a perfectly formed human baby. These are major roles, which are vitally important for our health.

A developing human foetus needs to change stem cells into the appropriate cells to construct heart, lungs, liver, kidneys, eyes, brains, head, shoulders, knees and toes. This process requires the presence of adequate levels of Vitamin A. Slight abnormalities will occur if there is insufficient retinol. If there is a serious deficiency in the mother, major defects can arise resulting in miscarriage or the new-born being unable to survive. Recent studies have shown that an insufficiency in maternal retinol can lead to a slight defect in the lungs giving rise to childhood asthma.

Vitamin A is vital for the development and maintenance of skin and all our mucous membranes. These are the wet surfaces which make up the nose, mouth, digestive tract and lungs. They appear to be inside the body but, strictly speaking, they are external. They are the surfaces through which viruses and bacteria can gain access to the body and, therefore, their integrity is a vital first defence in our immune system. Optimum levels of Vitamin A maintain these membranes and protect us from infection, including from the coronavirus giving rise to Covid19.

Vitamin A plays a vital regulating role in the immune system. Vitamin A deficiency leads to a loss of ciliated cells in the lung, an important first line defence against pathogens. Vitamin A promotes mucin secretion and microvilli formation by mucosa, including the gastrointestinal tract mucosa. Vitamin A regulates T-cell production and apoptosis (programmed cell death) (Nutrition Reviews 1998;56:S38-S48). These are all important functions in the fight against Covid19.

Lack of vitamin A interferes with optimal function of the hippocampus, the main seat of learning. Scientists at the Salk Institute for Biological Studies in San Diego, California, found that removing vitamin A from the diets of mice diminished chemical changes in the brain considered the hallmarks of learning and memory (Proc Natl Acad Sci, Sep 25, 2001 98(20):11714-9). Children need a good supply of Vitamin A to succeed academically.

Vitamin A can be helpful in the treatment of psoriasis. Researchers found that patients suffering from severe psoriasis had low blood levels of vitamin A (Acta Derm Venereol Jul 1994 74(4):298-301). Elderly persons who consume adequate vitamin A are less prone to leg ulcers (Veris Newsletter Dec 1999;15(4):5).

The NHS advises pregnant women not to take too much vitamin A and to avoid foods rich in retinol, like liver. This section below is copied from the NHS website.

Why do they say this? A study published in 1995 suggested that large doses of active vitamin A could cause birth defects in babies. It received a great deal of publicity and guidelines were altered because of it. Medical staff involved in obstetrics and paediatrics repeat this advice because they are fearful of being sued if a child is born with defects and they have given this warning.

In the study, researchers asked over 22,000 women to respond to questionnaires about their eating habits and supplement intake before and during pregnancy. Their responses were used to determine vitamin-A status. As reported in the newspapers, researchers found that cranial-neural-crest defects increased with increased dosages of vitamin A; what the papers did not report was the fact that neural tube defects decreased with increased vitamin A consumption, and that no trend was apparent with musculoskeletal, urogenital or other defects. The trend was much less pronounced, and less statistically significant, when cranial-neural-crest defects were correlated with vitamin-A consumption from food alone.

There are many problems with this study. It is based on unreliable food frequency questionnaires, which were used to calculate vitamin A status but no measurements of blood levels were taken. They did not highlight the difference between vitamin A from supplements and from natural sources in food. Distinctions between synthetic and natural vitamin A have been absent in the extensive media coverage of this study. In fact, the newspaper reports contain implied warnings against pregnant women eating liver, dairy products, meat and eggs, but none against eating fabricated foods like margarine and breakfast cereals to which synthetic vitamin A is added. And there has been no media coverage for subsequent studies, which found that high levels of vitamin A did not increase the risk of birth defects. A study carried out in Rome found no congenital malformations among 120 infants exposed to more than 50,000 IU of vitamin A per day. A study from Switzerland looked at blood levels of vitamin A in pregnant women and found that a dose of 30,000 IU per day resulted in blood levels that had no association with birth defects. Just like so many other things in nutritional advice, the narrative has been set in stone and it is going to be difficult to change it.

What should you do?

I have shown a selection of the vitally important contributions vitamin A makes to our health. The NHS advises pregnant women not to eat vitamin A rich foods because of one observational study and ignores other studies with opposite outcomes. I do not want to tell anybody what to do, but I do want you to think about what makes sense.