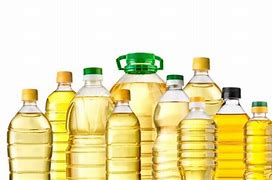 The NHS directive on healthy eating is known as the Eatwell Guide; never has an official document been so incorrectly named. One of the many fallacies it contains is the recommendation to replace natural fats like butter, lard, dripping and ghee with polyunsaturated ‘vegetable’ oils

This is from the NHS website, Choose unsaturated oils and spreads, and eat in small amounts. Unsaturated fats are healthier fats and include vegetable, rapeseed, olive and sunflower oils. Remember all types of fat are high in energy and should be eaten sparingly.

They make the claim that ‘unsaturated’ fats are healthier (than what?) without providing any evidence. They also make the mistake of suggesting that we should limit fat intake because it contains more calories (than carbohydrates). [This fallacy is debunked elsewhere on this site.] The quoted list of ‘healthy’ oils includes vegetable which is a misleading catch-all term for oils which do not come from animals – it is not a specific oil. Bottles in the supermarket labelled Vegetable Oil are usually blends of cheap seed oils. Rapeseed and sunflower oils are extracted from seeds with an industrial, high temperature and solvent process. Olive oil comes from the fruit of the olive tree and can be obtained by simply pressing the olives. Olive oil has been consumed for about 6,000 years, whereas industrial seed oils have been eaten for only the one hundred years since their extraction method was invented. The last one hundred years coincides with the greatest decline in human health that we know of.

What is wrong with seed oils?

There is nothing natural or healthy about the way in which they are made;

The first edible seed oils were made in America by two soap manufacturers called Proctor and Gamble. They started making soap with cottonseed oil, which was regarded as a toxic waste product from the cotton industry. They soon realised that cottonseed oil could be ‘hydrogenated’ into something resembling lard and they sold it as a substitute for traditional cooking fat under the name Crisco. They had managed to turn ‘toxic waste’ into a food substitute. ‘Vegetable’ oil was not a scientist’s health promoting discovery. It was a heavily advertised profit opportunity, which soon went from just cooking oil to the butter substitute margarine. Proctor and Gamble were now a big company and they gave large sums of money to the recently formed American Heart Association. In return, the AHA promoted P&G’s seed oil concoctions as ‘heart healthy’, without any genuine evidence to prove their claim.

What else is wrong with seed oils?

The NHS tells us to replace the naturally occurring, animal-derived fats like butter and lard with these unnatural, industrial, toxic, inflammation-inducing concoctions because they are the ‘healthy choice’. Our population has never been more unhealthy. The NHS Eatwell Guide is wrong.