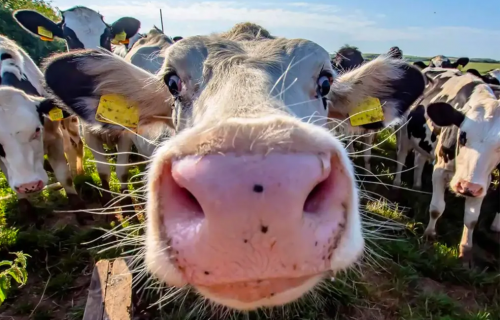 After the publication of the IPCC’s ‘Red Alert’ for humanity, the media has been full of ‘experts’ telling us what we can do to mitigate our role in the doomsday scenario. According to some of those who call themselves ‘Green Experts’, the most important thing we can do is to eat plants and stop eating animals. Here is a example from The Times:

First of all, I did not know there is a qualification which endows one with expertise in ‘green’. It would appear, from the first two advised changes, that a ‘green expert’ has no need to supply references for their numerical claims. Apparently, we each produce an average of 12.7 tonnes of CO2 each year and this is equivalent to eating 1,000 steaks. Why would you compare total CO2 emissions to a single food item instead of how many miles we drive in a car, or how much fuel we burn to heat our houses? I think the only reason you would do it is because you have an anti-meat agenda. It is a pointless comparison; nobody eats 1,000 steaks per year. I will explain why this statement is nonsense later.

The ‘Eat Plants’ recommendation suggests that we can reduce our carbon footprint by 73 per cent by switching to a plant-based diet. Is that 73% of our dietary carbon footprint or our entire carbon footprint? It is not clear. How does anybody come to the figure of 73%? How can a cow fed on grass in my local farmer’s field and sold by my local butcher be compared to green vegetables flown from Kenya and driven 200 miles by truck? These are the sort of calculations, full of assumptions, which are used to measure the ‘carbon footprint’ of different foods. Even the author, Lucy Siegle, warns about the poor environmental profiles of some of the most popular vegan foods like avocados and almonds. Despite this she states that ‘a careful switch to plants is the biggest change you can make’. Green experts always make these broad claims without any reference to nutrition. It should be illegal to recommend, in print, a plant-based diet without warning the readers of the dangers of vitamin B12 deficiency.

The argument against cows is always based on methane. The bacteria in the rumen of cows and sheep digest plants by fermentation and a by-product of this process is methane, which is produced at a rate of 5% of the food eaten. Methane is said to be a much more potent greenhouse gas than CO2 and laboratory tests suggest it is 23 times more effective at capturing heat. This is the main reason cited by most climate-based, anti-meat proponents. The important thing to remember is these are laboratory results; they are not real measurements from the atmosphere. In a lab gases are tested individually but in the atmosphere they are mixed with all the other gases.

Methane can only absorb heat radiation in a narrow band of wavelengths. Methane exists in the atmosphere as a rare trace gas with a concentration of less than two parts per million. Water vapour is by far the most important greenhouse gas. It absorbs heat over a wider range than other gases and exists in the atmosphere as at least 10,000 parts per million. This diagram shows the infra red absorption spectrum of all the greenhouse gases.

The red lines in the diagram denote the wavelengths at which methane, CH4, is able to absorb heat radiation, and is taken from Methane, the Irrelevant Greenhouse Gas. These specific wavelengths are already being absorbed by water vapour, H2O. Because water vapour is almost 10,000 times more concentrated in the atmosphere it absorbs almost all the heat at those specific wavelengths. Consequently, there is almost no heat for methane to absorb and reducing it by avoiding meat (and having fewer cows) will make no difference whatsoever. Green experts need to Stop Feeding Us Lies.