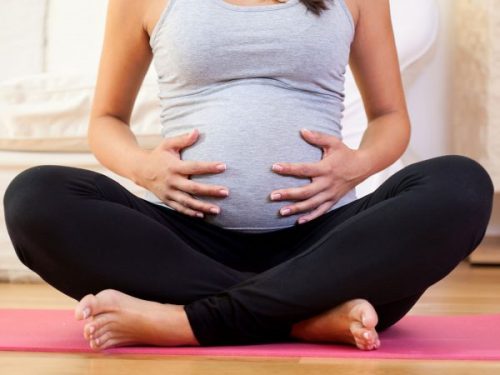 According to a study published by the Society for Endocrinology a deficiency of vitamin B12 is linked to obesity during pregnancy. Vitamin B12 is only found in animal-sourced foods and is not present in an entirely plant-based diet. These are the conclusions of the study:

Vitamin B12 is a micronutrient found in seafood, meat, and dairy products that is essential for many metabolic reactions that keep our bodies functioning normally. Diets high in carbohydrates and highly processed foods provide poor nutrition and can lead to vitamin B12 deficiency. Approximately 25% of pregnant women worldwide are vitamin B12 deficient, as an even higher intake is needed for the growth and development of the baby. Previous studies suggest B12 deficiency increases the risk for metabolic complications such as obesity or diabetes, but the underlying mechanisms affecting fat metabolism remain poorly understood.

In this study, Jinous Samavat from the University of Warwick Medical School investigated how low vitamin B12 levels affect fat cell function in cultured cell samples and in samples taken from pregnant women. Markers of fat metabolism in both lab-grown fat cells, low in vitamin B12, and in samples from vitamin B12 deficient pregnant women, indicated increased fat production and reduced ability to breakdown fat for energy. There was also increased inflammation, which causes further damage.

Jinous Samavat comments, “Taken together, our data indicate that low B12 levels can impair fat cell metabolism, which may lead to increased fat accumulation, impaired fat metabolism, and inflammatory damage, all of which predispose to weight gain.” Although these findings suggest how fat metabolism may be impaired in vitamin B12 deficiency, particularly in pregnant women, larger studies are needed to confirm this and further explore the underlying mechanisms, to identify intervention strategies and help prevent obesity.

Samavat says, “Our findings reinforce the need for vitamin B12 supplementation during pregnancy and make a strong case for funding further studies and introducing public health policies to help tackle obesity.”

It is interesting that vitamin B12 has a role in fat metabolism as well as all of its other functions. It is also interesting that University academics nearly always end their studies with the suggestion they need to do more research, which they hope will bring more funding to their organisation. It is also curious that they recommend “vitamin B12 supplementation during pregnancy” instead of a vitamin B12 rich diet, which would necessarily include the consumption of plentiful meat and seafood.