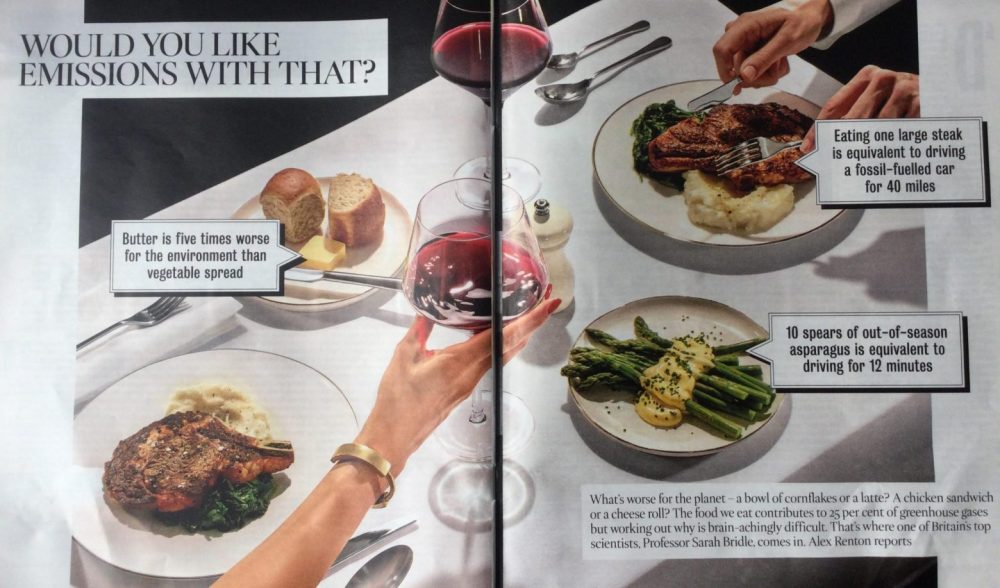 Many years ago, we were warned about the dangers of ‘global warming’. The name for this impending doom was later altered to ‘climate change’. Presumably, this was done so that whatever happened to the climate, our self-indulgent way of life could be blamed. The media have now started to ramp up the fear by referring to this concept as the ‘climate crisis’ or ‘climate emergency’. Daily fearmongering across mainstream media has shown that people can be persuaded to believe implausible ideas if they have already been made to feel sufficiently scared.

Outrageous notions are now coming thick and fast. Recently, we had the Cabinet Minister, Kwazi Kwarteng, telling us we must go vegan to ‘save the planet’. In the Times Magazine of April 24th, there is an article which attempts to rank foods by their greenhouse gas emissions. The piece is inspired by “one of Britain’s top scientists”, who has written a book about food and climate. The top scientist is a Professor of Extragalactic Astronomy. She has become a vegan because of what she believes to be the greenhouse gas emissions produced by livestock.

The headlines in the article included ‘Butter is five times worse for the environment than vegetable spread’ and ‘Eating a large steak is equivalent to driving a fossil-fuelled car for 40 miles’. My first thought was that if I drove 40 miles I would still be hungry, but if I ate a large steak I would be satiated and well-nourished. Sadly, the extraordinary level of misinformation in this is article is no laughing matter.

There are two major problems the Professor has failed to understand. The first one is basic biology and the second is the purpose of food.

1.The rhetoric goes along these lines: cows belch methane; methane is a greenhouse gas; we need to get rid of cows. People who push this idea insist we must stop eating meat because farm livestock are responsible for ‘emissions’ which are so huge they are heating the planet to dangerous levels. The thing none of them seem to grasp is that it is impossible for cows and sheep to emit greenhouse gases; they can only recycle some of them.

Cows and sheep only eat plants. A lot of people think plants grow out of the ground, but this is not strictly true: they are rooted in the ground and get water and minerals from the ground but they grow out of the air. Every carbon atom in the structure of a plant was taken out of the air, as carbon dioxide, during photosynthesis. When animals eat and then digest those carbon atoms to create their own structure, the process produces methane gas, as a byproduct, at a rate of about 5% of the food eaten. After a few years in the atmosphere that methane is converted to CO2 and the ‘carbon cycle’ continues, as it has for tens of millions of years.

When we drive a car 40 miles, we burn carbon-rich fuel, which has been stored underground for millions of years. Therefore, cars emit greenhouse gases which add to the total in the atmosphere whereas cattle recycle some, which does not add to the total. This basic difference seems to be totally ignored in reports on this subject.

We are often told that cattle farming is ‘unsustainable’. This, of course, depends on how it is done. When the settlers and farmers from Europe arrived on the plains of mid-west America, they found the most fertile soil they had ever seen and in places it was between six and ten feet deep. That soil existed because 75 million bison and deer had roamed the land, for thousands of years, eating the grass that grew there and leaving their ‘manure’ upon it, before moving on. This process involves a symbiotic relationship between ruminant animals, grassland plants and trillions of bacteria and fungi in the soil. Universities and farmers around the world have proved that regular movement of herds of livestock to fresh grass, in a way which mimics nature, increases carbon storage in the ground and simultaneously improves soil fertility. Wild herds of ruminants have been doing this for 50 million years; a timescale which suggests to me that it is ‘sustainable’.

One hundred years ago those American farmers were growing wheat on as much of that land as they could because wheat prices were high. They did so much ploughing and planting of a single crop, they turned those deep, fertile soils into what became known as the ‘dust bowl’. The grass, which had covered the prairies for a million years, was turned over; the fungal network was destroyed; the land dried out; and when a period of drought came, the soil was turned to dust and blown by the wind, across the country, as huge, dark clouds. Thousands of farmers were made bankrupt and there was an enormous exodus of people from the mid-west to California, in search of work. The US Government bought millions of acres of land and replanted it with the original prairie grass. History shows us that it is mono-crop arable farming which is unsustainable.

2. In the Times Magazine article the Professor of Extragalactic Astronomy listed a wide variety of foods and quoted the supposed emissions of each. Throughout the article, however, there is no mention of the nutritional value of any food, which is, surely, an essential factor in our diet. Suggesting that we should eat vegetable spread instead of butter, for example, ignores the fact that butter is a natural product with considerable quantities of vitamins A, B12, D, E and K2 and omega-3 fatty acids. Vegetable spread is a highly processed, unnatural food substitute usually made from sunflower oil. This oil contains high levels of omega-6 fatty acids, which are known to increase inflammation. Chronic inflammation is linked to heart disease, arthritis, depression, Alzheimer’s disease, cancer and age-related macular degeneration.

Plant foods contain no vitamin B12. A deficiency of this essential nutrient can lead to brain atrophy in children, psychosis, hallucinations, weakness, unsteady gait, fatigue, irritability, loss of appetite, weight loss, symptoms of depression and megaloblastic anaemia. Sadly, many people, like the Professor, are willing to risk the health consequences of a vegan diet because, somehow, they have been persuaded that the climate of this planet is controlled by the digestive system of cows. A far bigger problem, which is not being tackled, is the enormous burden of obesity, diabetes and all the related metabolic disorders suffered by millions. This health catastrophe is intricately linked to a diet containing too much processed, fake-food and not enough nutrient-dense real food, like butter and meat.